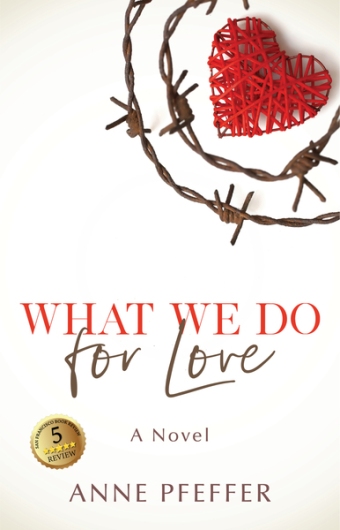 Enjoy an excerpt from What We Do for Love ❤

Funny how one’s life can make a U-turn.

My life made two. In a single day.

I started that day as a mere potter—yes, a person who hand-makes vases and dinner plates for a living—wearing borrowed clothes and driving to the most important interview of my life. A few hours later came U-turn number one: the board of directors of CCMLA, the Contemporary Crafts Museum of Los Angeles, offered me a place in their upcoming show!

In an instant, I had become an artist. I pondered this fact wonderingly as I drove home that afternoon. I was to provide them with a brand-new, never-before-seen mural in ceramics, an installation piece. My wall would be located at the entrance to the exhibit, the first thing you saw as you walked in. This was my chance, an incredible opportunity.

I was an artist!

It didn’t bother me that desperation clearly underlay the board’s decision. All the better when I saved the day with a great contribution to their show.

Flushed with success, I revved my ancient Toyota, Bernice, up to twenty-two miles per hour. We practically skipped over the potholes as we barreled our way up the Trail of Terror. This was the name my son Justin had given the rutted, one-lane road that wound its way up the side of Laurel Canyon to our house.

Of course, I was a fill-in, hired at the last minute. I’d gotten this job when Miriam Fletcher, a customer of mine who happened to be on the museum board, moaned to me that an artist had dropped out of a show scheduled to open in six weeks. “We’re in such a pickle! We don’t know what to do!” Though her crepey neck revealed a senior citizen, Miriam otherwise projected youth, running long acrylic nails through her cropped, bleached, and spiked hair, her copper earrings swinging.

Miriam trained her eyes upon me. She had recently ordered customized handmade pieces from me to give to her granddaughters—a miniature tea set for the youngest and a statuette of a mermaid for her older sister.

“You do such beautiful ceramics work, Nicole.”

And now I had. I could hardly wait to tell my son the news. After sixteen years of single motherhood and hard work, struggling to support myself and Justin, I couldn’t blow this chance. And yet, I’d never done anything like this before.

You can do this, I told myself. I had to. Letting the museum—and myself—down was unthinkable.

I could practically hear the snap-crackle-pop of my nerves.

I pulled into what we called the car park, an open space situated beside the house at the top of the Trail of Terror, big enough to park a half dozen cars. Justin’s Ford Focus wasn’t there.

When he got home from school, which should be any minute, we would raise a toast, our champagne glasses filled with sparkling apple cider.

The day was unseasonably hot, and I was boiling in Bernice, her air conditioner long dead. Thank heavens my hair had stayed up all day in the deliberately loose knot that I’d coaxed it into this morning, with pretty little bits of hair hanging down around my face. A chignon, according to the YouTube tutorial. One more degree of humidity and my whole head would have coiled itself into a giant Brillo pad right there before the entire board of directors.

And thank goodness I’d been able to borrow my sister’s striking red-and-orange colour-blocked linen dress, which had given me just the boost of artist/businesswoman confidence that I’d needed. Now though, its linen skirt was hopelessly creased and hiking up around my hips. I bounded out of the car and proceeded along the circuitous route that we all used to enter the house, going through the rickety side gate and past what was technically our front door, which no one ever opened. Instead, I followed the path that ran alongside the house toward the yard and pool, giving a glance to my irises and roses, which grew under our bedroom windows.

The white, yellow, and purple irises stood tall and elegant, but it was the roses I really loved—the fluttery, homegrown variety that came in every colour of the sunrise. I would have to harvest some for tonight’s dinner table.

As I reached the yard, I stepped from the cool shade of the side path into the direct, hot sunshine. The sliver of Los Angeles ahead of me that appeared on clear days like this one, the perfume of herbs and blooming plants, the swimming pool that shimmered invitingly—except for my college years, this had been home all my life. Along with my sister Caroline, I’d inherited the small, dilapidated house on its magnificent parcel of land in the Hollywood Hills. At today’s prices, neither of us could have ever afforded to buy it.

Entering the house as always through the French doors off the living room, I waltzed into my bedroom. It was the beginning of a new era. Soon, there would be no more making pottery on consignment. No more sets of dinnerware for twelve.

I shouldn’t get ahead of myself. Of course, I would continue to operate Clayworks. Those dinner sets paid the bills after all. Still, though, there was now a chance I could taper off the business over time if I could sell some of my more creative pieces. Imagine me, finally, at age thirty-eight, beginning to show in museums and galleries.

I changed into my regular daywear—a sleeveless cotton blouse, long flowy skirt in the coolest featherlight cotton, and Teva sandals.

My old friend Mike Sawyer would be over to eat with Justin and me as he did most weeks, once or twice. Maybe I’d give them both my wonderful news at the same time.

No, I couldn’t wait that long to spread the news. I knew I would tell Justin the minute he walked in.

Hearing the muffled noise of a door opening, I sprinted to the kitchen, where my son, home, at last, would for sure want to hear all about it.

I stopped short when I saw that Justin was not alone.

Superbly written. Pfeffer has teamed a solid plot with great dialogue, effective narrative, and some nice romance for a well-rounded work of women’s fiction.”
—Self-Publishing Review

If Lorelai Gilmore of Gilmore Girls was dropped into a thriller, it might resemble this appealing novel.”
—Kirkus Reviews

Award-winning novelist Anne Pfeffer grew up in Phoenix, Arizona reading prodigiously, riding horses, and avoiding rattlesnakes and scorpions. After living in Chicago and New York, she escaped back to the land of sunshine in Los Angeles. She has worked in banking and as a pro bono attorney, representing abandoned children in adoption and guardianship proceedings. Anne has a daughter living in New York and is the author of four books in the YA/New Adult genres.