I am a fan of mythology and sci-fi and to add on to the flavour this book has a thrill as well.

Title: The Whispering Dwapara: The rise of Maharathis 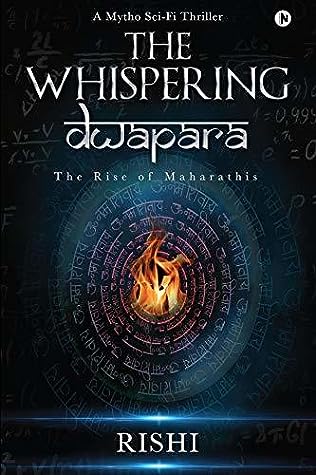 Kings and Scientists, Gurus and Professors, Maharathi Warriors and Indian Army Veterans. All will fight against the rising dark powers of Pataal Loka: The Asuras.

Kingdom of Vedgarh, an ancient home of purebred Aryans nestled amidst the Himalayas and hidden from the modern societies, is the sole preserver of sacred Vedic knowledge and celestial powers. Sitting on the verge of yet another great war with Asuras, the kingdom is eagerly waiting for a Maharathi warrior to lead its forces. With intensifying Kaliyuga, Asuras’ dark powers are rising with every passing day.

As a fallback step, the kingdom opens its gates for modern Science and weapons. A grand research project begins to harmonize ancient Vedic miracles with modern scientific principles. But the budding internal politics is eating up the kingdom like parasites. Will it impact the research project as well? What will happen if an internal conflict arises between Modern Science and Ancient Vedic science? Will Asuras win and destroy the universe’s last hope of defeating the Kaliyuga forever?

Book one of The Forbidden Rhymes series begins the saga of the greatest war of Daivi Astras in the history of mankind.

The book is set in a place called Vedgarh which is occupied by people with superpowers. The ones that we read about in India Mythology. The powers to destroy the entire universe with celestial weapons. The powers that are acquired by intense meditation and will.

People with such powers are trying to save the Aryan Vedic Knowledge from being destroyed by the Asuras(demonic powers).

For the same purpose, people with extraordinary talents are selected from the modern world and bought into this secret place away from the knowledge of modern people.

The Legends say that this place is still in Dwapara Yuga. It is because of this knowledge that Kaliyuga is still unable to percolate here!”

Some Men of intelligence and Kids with special abilities are one day bought to Vedgarh and then begins their journey of fighting the evil and saving the ancient Vedic Science and powers.

The best character in the book for me was Chitra, a strong-willed and determined woman, who is the King’s(of Vedgarh) illegitimate child and is on a mission to get acceptance.

You will find all sorts of characters from valiant to cowards, from intelligent to foolish, from determined to hopeless and from clever to dumb, the list is big.

The story will thrill you the most when you are approaching the end. I kept on turning the pages to know the truth. Although I felt a little disappointed in the end because it was not favourable and I did not find a Happy Ending but I hope the writer write the sequel soon.

This book has been a fully immersed experience for me after a long time since I could connect my imagination fluently.

I would end the book praised by the most horripilating lines from the book:

The most elite minds of the world are invested not in discovering, bu in re-discovering.”

Rishi is a passionate writer since his school days. His first book was published worldwide in 2012. He is also the author behind a handful of articles in The Times of India and a few blog posts on Indian mythology.

An IIM Calcutta alumnus, Rishi currently works as Senior Principal Consultant at Oracle. He lives with his parents, his wife and a five months old son in Bangalore. He is 32.

Rishi can be often found reading about Indian mythology during his free time. He is a bonfire guitarist, an avid Chess, Badminton and Table Tennis player, and a marathon runner. He also loves cooking and eating Indian food.

CONNECT WITH THE AUTHOR ON:

Which are the top 5 must-read Books by Paulo Coelho?

Do you believe in magical powers? Do share your thoughts about this book with me in the comments below. I would love to read them. Happy Reading!