Title: The Scorpion of Chernobyl 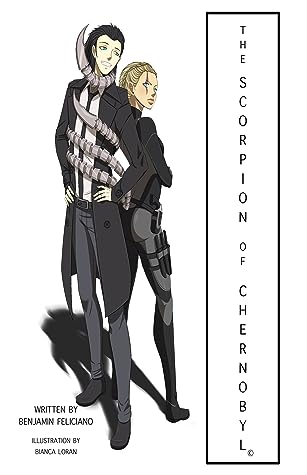 The first installment to the ‘DEATHSTALKER SERIES’. A fast paced, scifi/ horror novel that follows the sinister young bounty hunter, Ande, who is trapped in the Soviet nuclear exclusion zone that is Pryp’yat’ city. Stuck between finding her sister’s killer and keeping the mutant mafia off her back, she struggles to find what it truly means for someone like her to be free, care for somebody other than herself, and somehow maintain her sobriety. Each chilling and gruesome chapter is a whirlpool of world building lore and mystery of what ‘really happened’ in Chernobyl, and is bound to leave the reader at the edge of their seat as she battles one oddity after another and comes face to face with the horrors of nuclear fallout.

The Scorpion of Chernobyl is set post-Chernobyl nuclear eruption which puts the population living nearby into an awfully hazardous state of disease and turns them into Nightwalkers. The people of Pryp’pat have been imprisoned within the land of contamination out from the real world. But the Russian people still have the impression that those impacted were rescued safely unfamiliar of the fact that they have been left to decay and die in situations like hell. People have died of Necrosis, many are counting their days, and are trying to escape finding some loopholes because they know that the Soviet government isn’t doing anything to save them. They have failed power over the area, so they turned to violent means and barbarity over the innocents. Variants, who have had transformations in their DNA are rebelling against the problems that have occurred in the region and one amongst them is Ande who is functioning for the Underground mafia, The Elect and is also on an expedition to find the killer of her sister. All this creates a lot of warfare and bang. Even the Departmental police headed by Stas is following the footsteps. What happens when they finally see the nightwalkers in reality? What is that bitter past that Ande and Stas share? Will Ande be able to bail the innocent people from the Nightwalker’s beastliness or will she be outlined before that? How will the Nightwalkers vanish? Will the truth ever emerge to society?

I precisely enjoyed the story layout and the illustrative detailing done by the author. Also, the anti-hero Ande has been grown as a really powerful character which I liked the most. The rush that the story made by the letters, in the beginning, was very impressive. Only that I felt a little lost in between. But the story picked up again in the finale. I enjoyed the twists and rolls in the story and I recognize the imagination the author has put into making this dystopian world seem real to me.

Benjamin Feliciano is a young writer based in Southern California. While deployed overseas, he began writing “The Scorpion of Chernobyl” as a vessel of self expression. This is the first insstallment of  ‘The Deathstalker Series’, and in ihs first worl among many others to be printed. Feliciano works full time in the Marine Corps as a combat Engineer and lives with his wife, Bethany, in their Oceanside Apartment. Because most of the writing took place overseas, he did not have access to conventional techniques of writing, meaning this novel’s manuscript was written in the notes app on his smartphone. His literary inspiration is derived partially from his line of worl and his experince theirein, but also from how he preceives the world; “A corrupt beauty, we loathe to enjoy.”

WHAT IS FAERY: THE TIEND BY IGO RAB ALL ABOUT? BOOK REVIEW

4 of 5 stars to The Scorpion of Chernobyl by Benjamin Feliciano https://t.co/C8ndYmTmc7

DO YOU KNOW WHAT ‘THE SCORPION OF CHERNOBYL’ HAS INSIDE? BOOK BY BENJAMIN FELICIANO
.https://t.co/rFD7VU08Es pic.twitter.com/pgbsbtZ8vD