The cat hunter is a stunning psychological thriller portraying the innermost depths of human callousness and cruelty. It depicts the diabolical nature of a person who has no conscience, no guilt, and no qualms when it comes to killing people. It all starts with the innocent cats, and the story takes ruthless and murderous turns. The story is set in a fictional place in the U.K. by name Grandstone Bay, and a nearby place named Rosefield. The story starts with Christopher Douglas, aged 17, one of the main characters in the story waking up to the alarm clock early in the morning. His parents have gone on a long vacation. He has a cute pet cat named Crystal. He has a very close childhood friend by name Barbara Beatrice, and they both go to the same college. With each page passing by, it describes the college life of both the characters. The classes they go to, the crushes they have, the friendly fights between them and other frivolities of the late teenage life. It makes readers pondering how thrilling teenage life can be.

What he saw, as the blackout blind rolled out of view, caused his stomach to churn.Piled in clear view of the window was an indefinable bloody mass. Patches of sticky and mottled hair stuck out in various directions, crimson beads rolling down them and glinting in the light. Flashes of pink flesh and white bone could be seen, through bright red lacerations, like stained teeth and tongues through red lips. Every so often a grey jelly-like substance, that Christopher could only assume was brain matter, had globed together. The thing that most gripped his attention, however, was the eye. Set down at least three feet away from the pile, the eggy yellow orb stared towards him, through a single slit pupil.”Jesus fucking Christ…”

Christopher Douglas, a 17-year-old is buddies with Barbara Beatrice who is always trying to urge Christopher to get a life and stop policing himself. She wants him to go to Eric’s party with Georgina Bell who has a fascination for him.

But rather, Christopher is attracted towards Maddie, Eric’s sister in an unusual way in the party. They have been constantly conversing since that day until he learns that it is not Maddie who is texting him daily. If not her, then who has been talking with him for so long?

Meanwhile, Drake Gregory has been functioning on a case he isn’t allowed to deal with. It’s about the missing cats at Grand stone Bay. He speculates someone is killing all of them and he has been able to find a pattern behind their missing.

Also, to his surprise, Harold, his senior, has allowed him to interrogate the case further and asks him to tell on if he finds any clue. Who has been killing the cats and why?

What shifts does the case take when Drake and his partner Osborne finds Odette Tate dead in her house and her cats been ripped to limb from limb?

I genuinely don’t want to be a spoiler. It was the nicest book I have read by an Indian author after such a long time😍.

The detailing of the circumstances was so subtle that you can see picture running in front of your eyes.

The author has kept the uncertainty and rush to the very end of the book. Also, you feel you got the criminal but you are proved wrong😁

I would refer this book to everyone who has been wanting to read some decent thrilling & exciting book by an Indian writer.

*Some scenes are disturbing. Discretion advised*

A stay at home mom by profession, Krishna mesmerizes us with her heart touching, deep poems and stories. She weaves magic through her words and her characters are inspired from real life incidents. Krishna has been a lifelong writer and first began creating other worlds and characters in her school days. When not absorbed in latest gripping page turner, she loves listening to music and playing with her daughter. She is a Gujju by heart who lives in Hyderabad, with her hisband and daughter. 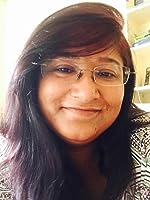 THE SECRETS OF HAWTHORNE HOUSE BY DONALD FIRESMITH: BOOK REVIEW