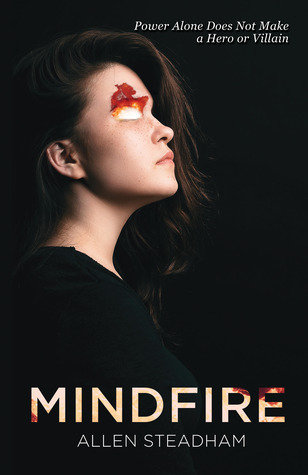 “For unto whomsoever much is given, of him shall be much required.”

Leia Hamilton can move things and set them on fire with her mind.

Leia’s father and step-mother tried to hide their past: a time when they were part of a team of superheroes. But despite being disbanded for over twenty years following a series of tragedies, their problems were passed to their children and Leia finds that her future collides with their past.

In the diverse world of human and superhuman, heroes and villains, friends and enemies, some of Leia’s choices have terrible consequences. For Leia, this leads to a personal crossroads and a search for redemption.

Not your normal superhero novel, Mindfire isn’t about secret identities, costumes, or evil plots endangering the world. Instead, self-discovery and adaptation is at the forefront as the reader follows the lives of the characters who are unafraid to show love and explore spirituality.

Can redemption and renewed grace weather the flames of absolute power and superhuman strength?

“Seeking revenge is like purposefully keeping your own wound open until you inflict it on someone else, making you as bad as the person who hurt you.”

Leia Hamilton is a daughter born out of a superhero and a supervillain’s affection. She has an ordinary life taking off until one day she begins to listen to some unnatural voices inside her head and it makes an effort to lead Leia.

Her meeting with Black fox and Shadow brings about some disclosures about the voice and that comes like a surprise to Leia.

The voice that is trying to lead her is of none other than the extremely dangerous and the psychotic woman who was also the strongest psychopath in the world.

Who is she and why is she bothering Leia with her voices?

What discoveries does Leia have to make about herself and her family?

Will those acknowledgements lead to an altogether unexpected transformation in Leia’s life as an ordinary person?

Mindfire is a superhero thriller Christian fiction which has depicted what it means to be a superhero and how their existences are.

The story is intriguing since the onset and the flings it takes in the preceding is great to read. That kept me rolling the pages.

The best in the book was Maleovalence who is an alter ego character and I enjoyed that character very much.

All in all, a book to peek into the lives of superheroes

HOW TO RESTORE YOUR RELATIONSHIP WITH YOUR PARTNER? DEEPENING YOUR PERSONAL RELATIONSHIPS BY DR. MAX HAMMER